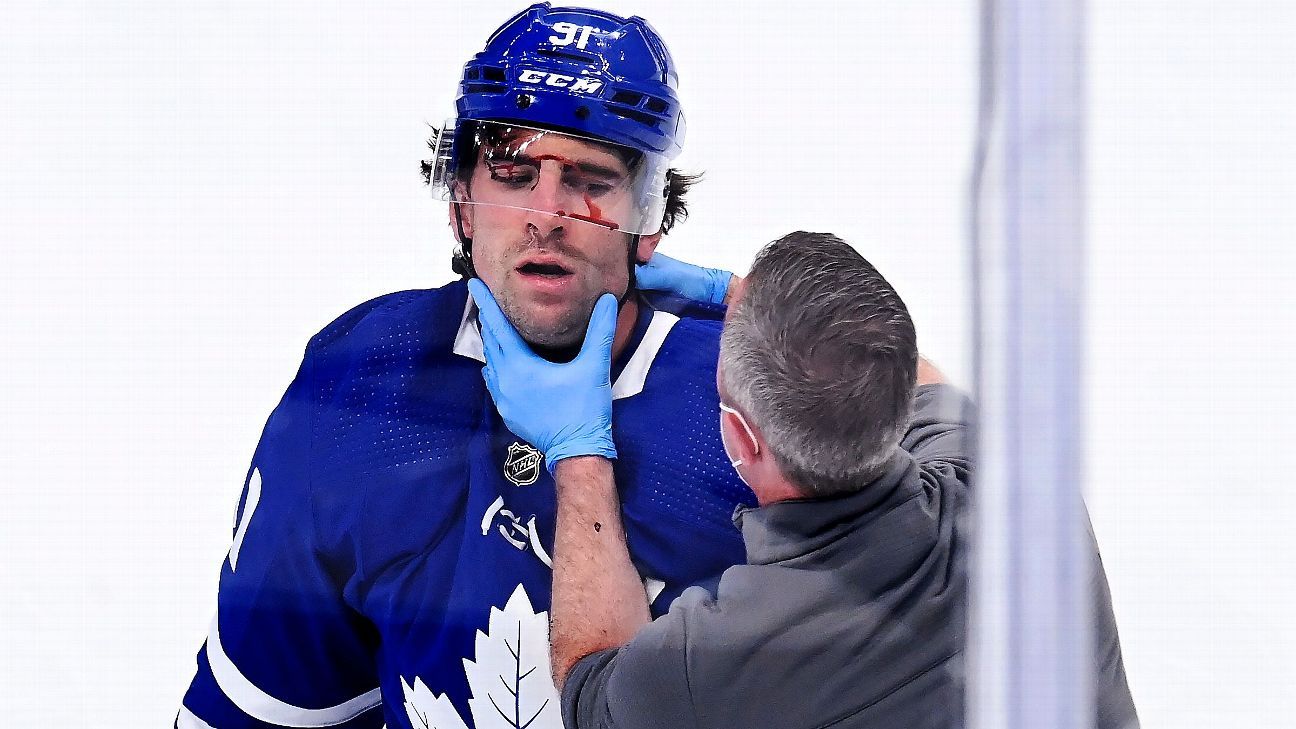 Toronto Maple Leafs captain John Tavares will be sidelined a minimum of two weeks due to a knee injury in addition to a concussion sustained during a collision in Game 1 of the series against Montreal, one that saw him leave the ice on a stretcher.

In the first period Thursday night, Tavares fell after a hit by Montreal defenseman Ben Chiarot. As he was falling, Corey Perry of the Canadiens skated into Tavares, accidentally striking Tavares’ head with his knee. Tavares left on a stretcher, giving a thumbs-up on his way off the ice.

Tavares was transferred to St. Michael’s Hospital in Toronto, where he received a CT Scan and an MRI. He was held overnight but returned home to be with this family and team doctors on Friday morning.

Maple Leafs general manager Kyle Dubas said Tavares was “thankfully cleared of all structural damage to his head, neck and spine, which was a major concern.” The team said Friday that Tavares sustained a concussion, and the evaluation also revealed he suffered a knee injury that will require at least two weeks of rehabilitation.

“The knee injury you can give a timeline on, but the head injury and concussion, it’s very difficult to place a timeline on when someone’s going to return from that. We handle those conservatively and sensitively. We will follow those protocols to a T with that,” Dubas said. “We have to be very careful and keep in mind that he’s got a young family and there’s an onus on us to protect him and his future.”

Toronto faces Montreal in Game 2 on Saturday night, having lost the first game of the series 2-1. Forwards Alex Galchenyuk and Pierre Engvall draw into the lineup for Tavares and center Riley Nash. It’s expected that winger Nick Foligno could shift to center on their second line to fill in for Tavares.

“I think the players and staff have done as best they can,” Dubas said. “These things are tough. These are athletes that a lot of people view as difficult to knock down and keep out. To see something in an accidental, freak situation like that happen, it makes everybody feel vulnerable. Especially the players who play the game.”

Record Rain, Low Temperatures In May In Delhi In Cyclone Tauktae Impact