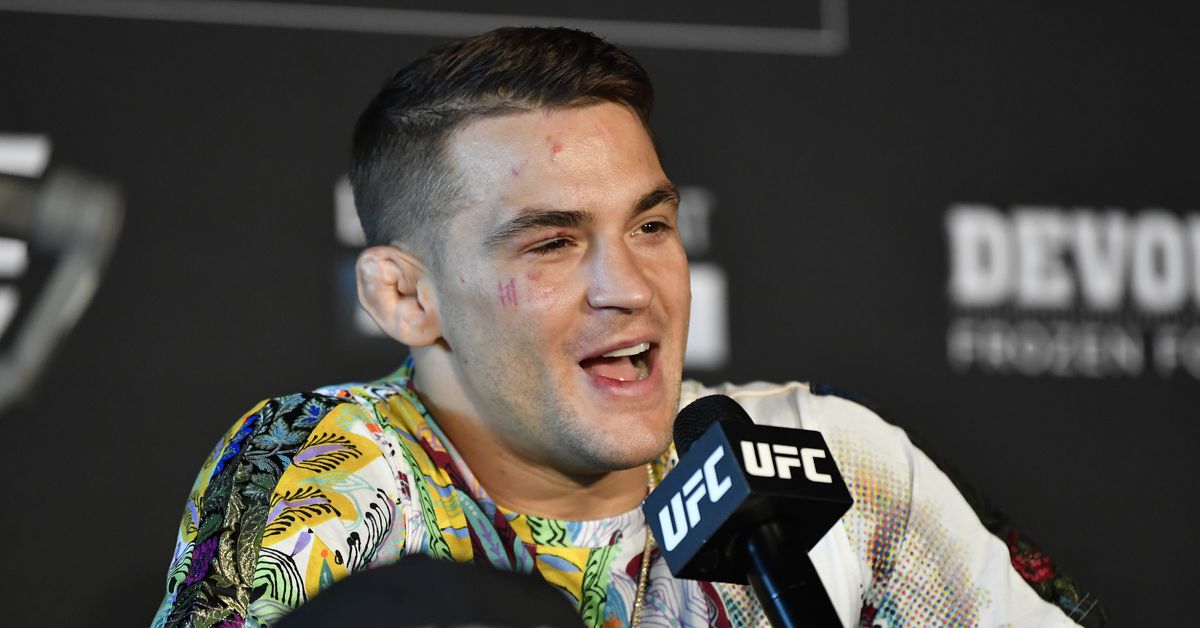 The easiest matchup to make after UFC 257 appeared to be Dustin Poirier and Michael Chandler, after both emerged from Saturday’s pay-per-view event with impressive knockout victories.

But Poirier doesn’t believe they’re in the same category, and he’s not keen on fighting the former Bellator champ after stopping Conor McGregor in the pay-per-view headliner.

“I can guarantee I won’t be fighting Michael Chandler,” Poirier told reporters, including MMA Fighting, at the UFC 257 post-fight press conference. “They can do whatever they want with the division. I don’t really care. If something makes sense, then we’ll do it.”

UFC 257 was initially framed by UFC President Dana White as something of an audition for the top lightweights, with Poirier vs. McGregor and Chandler vs. Dan Hooker competing to impress current UFC lightweight champ Khabib Nurmagomedov.

Chandler certainly did his part, stopping Hooker in the first round with a ferocious display of striking. But with Nurmagomedov looking less and less likely to reverse a decision to retire from the sport, Poirier thinks he should be considered the champ.

Of course, Poirier doesn’t actually hold the belt. But he should be fighting for it very soon, and if the UFC is doing things the way he believes they should be done, he said, then the person standing across from him next will be someone who’s earned the opportunity.

“No disrespect to [Chandler], he seems like a good husband, a good father, he speaks well, has a lot of respect, carries himself very well. It’s not a knock against him. It’s just my feelings toward the division and the sport. I lost to Khabib, I came out and put on a ‘Fight of the Year’ for you guys, got my hand raised against a top-five opponent after that. Then I come in there and Khabib doesn’t want to come back, then I knock out one of the biggest fights you can get. I knock this guy out, too.

“Khabib reiterates he doesn’t want to fight any more – dude, I’m the champ. I’m not going to fight, some – and like I said, respect to Chandler – a new guy to the UFC who just beat a guy that’s coming off a loss that I just beat for the belt. That’s not exciting to me.”

This past June, Poirier bested Hooker by decision to rebound after a loss to Nurmagomedov in a title-unifier. A candidate more appealing to him was Charles Oliveira, who’s won his past eight fights and most recently outpointed ex-interim champ Tony Ferguson in a commanding performance.

“I think he has more [of a case for the title shot],” Poirier said. “I’ve been watching that guy for 10 years in the UFC, two different weight classes. He’s fought the best of the best, over and over again. And, he’s been knocked down and gotten up, and he’s proven what MMA and perseverance is. I respect that. Not that I don’t respect Michael Chandler. I just think there’s more work for him to do than beat a guy I just beat.”

Oliveira was one of two names broached for the title shot, the other being Justin Gaethje, who, like Poirier, lost a bid to unify the belts. Before that, however, Gaethje was stopped by “The Diamond” in a brutal bout.

Asked whether Oliveira or Gaethje had a better claim to the title shot, Poirier chose the Brazilian.

“Just because he’s never had the opportunity,” Poirier said. “Gaethje just came out here and got beat, as I did. Not a knock on Gaethje, but he lost. I think Oliviera, probably, or let them fight to see who gets it.”

Poirier will ultimately see what the UFC has in store for him after getting some rest and relaxation. He put a huge feather in his cap by beating McGregor, the UFC’s biggest box office star and a former two-division champion. The next fight he takes has to be one he can justify as a veteran who’s earned his keep.