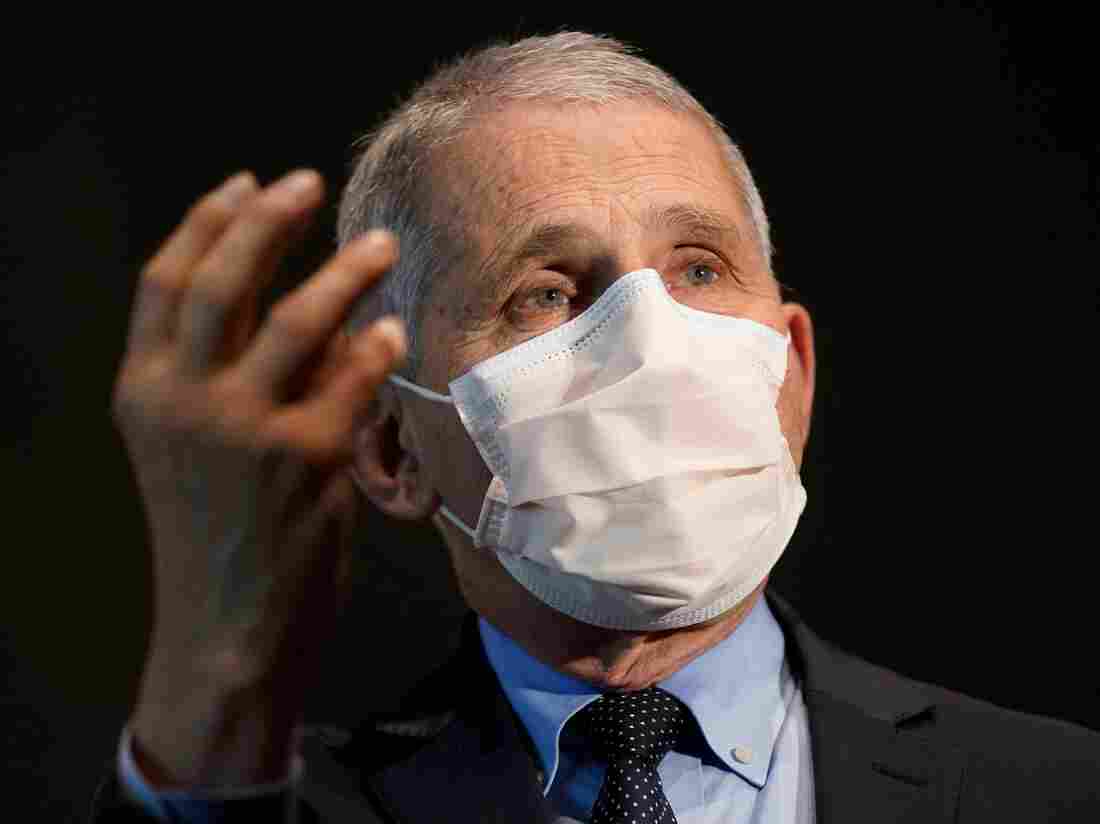 Dr. Anthony Fauci, director of the National Institute of Allergy and Infectious Diseases, said that changes in vaccine distribution could be necessary depending on what happens in the next few weeks. Patrick Semansky/POOL/AFP via Getty Images hide caption 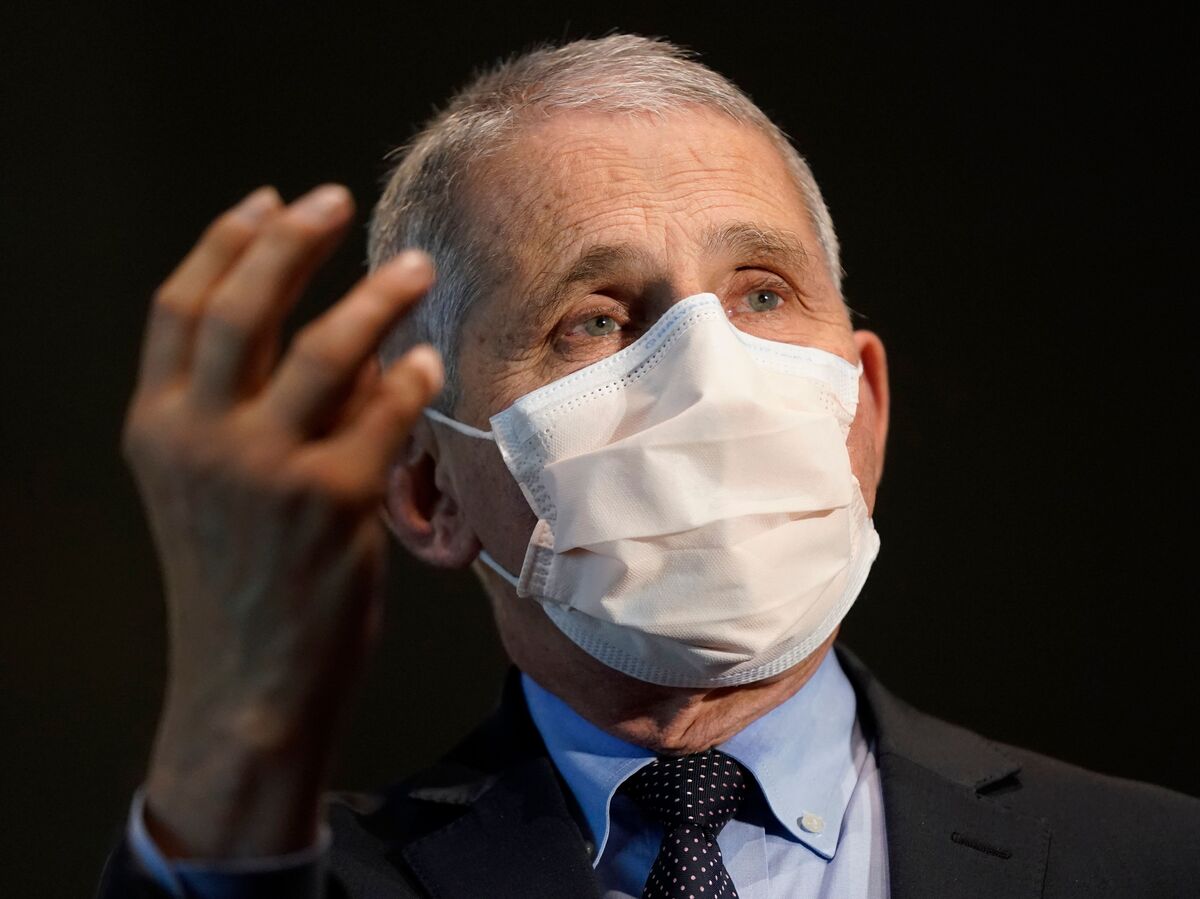 Dr. Anthony Fauci, director of the National Institute of Allergy and Infectious Diseases, said that changes in vaccine distribution could be necessary depending on what happens in the next few weeks.

Health experts warned that the coronavirus pandemic would get worse before it got better. And that is happening. December was the deadliest month of the pandemic in the United States. The vaccines have made people optimistic, but the process has been slow.

Dr. Anthony Fauci, head of the National Institute of Allergy and Infectious Diseases at the National Institutes of Health who will be President-elect Joe Biden’s chief medical adviser, said Thursday that the vaccines’ initial rollout has been slow because it came during the holiday period.

“I think it would be fair to just observe what happens in the next couple of weeks. If we don’t catch up on what the original goal was, then we really need to make some changes about what we’re doing,” he said in an interview with NPR’s Morning Edition.

Fauci also said that a more contagious variant of the virus first identified in the United Kingdom and now spreading in the U.S. underscores the need to follow public health measures like mask wearing and social distancing. And he said that while the U.K. has implemented a lockdown, he doesn’t see “any enthusiasm” for similar nationwide measures in this country.

Below are highlights of the interview.

We talked less than a month ago. The U.S. at that point had just reached 300,000 deaths. We are now at more than 360,000 Americans dead. Should we expect this trend to continue?

I believe, unfortunately, that it will. As we get into the next couple of weeks in January, that likely will be a reflection of the holiday season travel and the congregate settings that usually take place socially during that period of time. We’ve seen following most events that require travel and … have people, you know, understandably getting together in a social setting. So we believe things will get worse as we get into January.

Hopefully, if we really accelerate our public health measures during that period of time, we’ll be able to blunt that acceleration. But that’s going to really require people concentrating very, very intensively on doing the kinds of public health measures that we talk about all the time. Now’s not the time to pull back on this.

Well, yes. I think that what we’re going to be hearing and you heard the president-elect mentioned this, is to really put a lot of effort into making sure the rollout of the vaccine program accelerates. We want to get it to one million vaccinations per day, as the president-elect has mentioned. The idea about having everyone for at least 100 days — at least — wear a mask. Everyone uniformly, so we don’t have disparities where some people are adhering to public health measures and others are not. And then also a greater interaction, cooperation between the federal government and the states, instead of letting the states in some respects do things on their own to help them not only with plans, but with resources.

What do you think is the main reason behind the fact that the vaccine rollout has gone more slowly than expected? And how should the Biden administration make it faster?

Well, first of all, I think you have to look at the circumstances of where we are with the rollout. It’s the very beginning. And whenever you take an undertaking of a magnitude of trying to vaccinate essentially most of the country, there’s always going to be a bump in the road or a hiccup that we see. That’s not an excuse, we can’t make excuses. But I think that’s something to be expected.

The other thing that in some respects was unfortunate is that it got started right in the middle of the holiday season between Christmas and New Year’s. And that’s the reason why things start slow. I think it would be fair to just observe what happens in the next couple of weeks. If we don’t catch up on what the original goal was, then we really need to make some changes about what we’re doing. But right now, I think we just need to give a little bit slack — not a lot, but enough to say, well, we’re past the holiday season, now let’s really turn the afterburners on.

Many people, including health experts, are concerned about this more contagious variant of the virus first identified in the U.K. It is now in the U.S. How much does this worry you?

Well, you always have to be concerned when you see mutations that have a functional capability. Most mutations of RNA viruses in many respects are meaningless. The virus changes a bit, but there’s no functional change. We know from the experience in the U.K. that this particular virus is spreading much more rapidly. This just underscores the need to adhere to the public health measures that would prevent the spread of any virus, whatever the mutant is. But the bottom-line answer to your question, it’s serious enough we have to pay attention to it. We can’t just blow it off.

Do you think we need more aggressive lockdowns? The U.K. instituted one this week. Should the U.S. do the same?

You know, at this point a total country lockdown, I don’t think there’s any enthusiasm for that. There’s such a fatigue, a COVID-19 fatigue, that just people would have a real tough time with that. Short of that, you can do a lot of things. Also, in certain regions of the country, for example, California is suffering terribly. They’re having a stress on the system with beds, an exhausted health care group. I mean, understandably, these people have been working day and night. When you get to the point where the system is stressed like that, as the governor of California has said, you may look at selective lockdowns in certain parts of the state. I don’t think this is something that we’re ready for on a countrywide basis. But, you know, you have to keep your eye on everything that’s going on and always keep all options open.

We try to avoid always asking you to predict the future. But if Americans did abide by the public health measures — measures like social distancing and masking — when could things get back to normal?

Well, you know, you can’t look at that in a vacuum because as we’re trying to get people to adhere uniformly to public health measures, we’re having the rollout of the vaccine. We have a highly efficacious vaccine, 94 to 95% effective. As the months go by, I would expect by the time we get to April, it will be what we call open season on vaccines. Everyone will be able to get a vaccine. So I think by the end of the summer, if we get 70 to 85% of the population vaccinated and get a good herd immunity, I think by the fall we could start to approach some form of normality.

Phil Harrell and Steve Mullis produced and edited the audio version of this story. Avie Schneider produced for the Web.