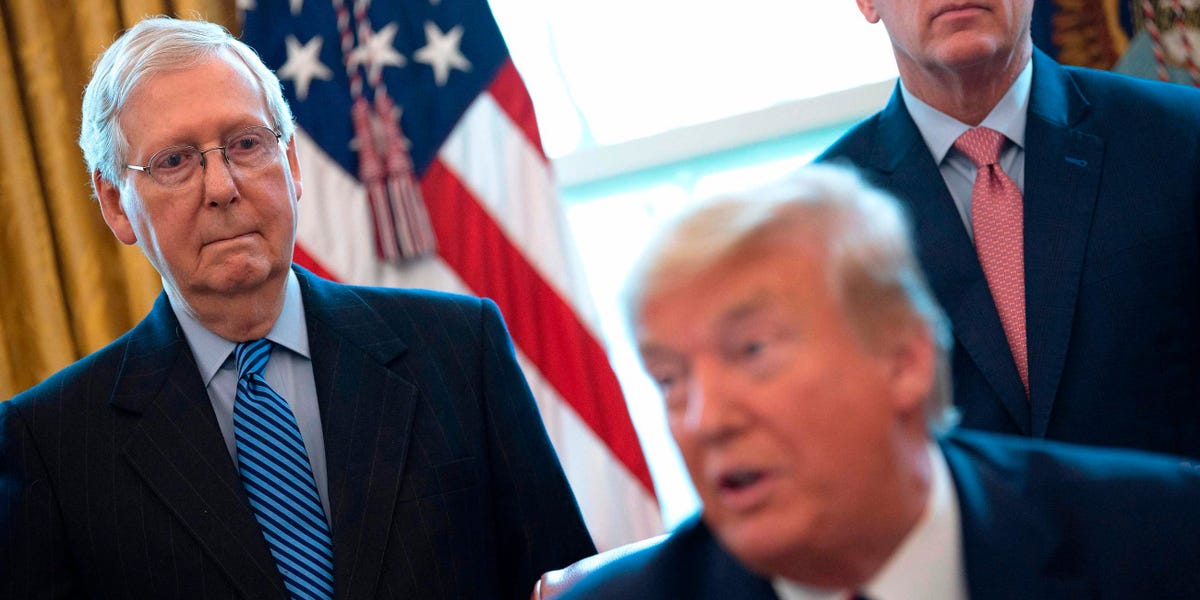 Senate Majority Leader Mitch McConnell said on Tuesday that the Senate would “begin a process” of considering a proposal to send $2,000 stimulus checks to Americans — a measure that Democrats and President Donald Trump have pushed for.

The Kentucky Republican said the direct payments were “linked” to Trump’s two other major demands: an investigation into his allegations of voter fraud, and an end to some protections for tech companies.

“Those are the three important subjects the president has linked together,” McConnell said. “This week the Senate will begin a process to bring these three priorities into focus.”

Don’t miss: Sign up here for our live event on January 5 to learn how to make the most out of PPP

But McConnell blocked an attempt by Democrats on Tuesday to hold a vote on the $2,000 checks. Senate Minority Leader Chuck Schumer, a New York Democrat, had called for an immediate vote in the upper chamber after the House passed supplemental legislation known as the CASH Act on Monday night with the support of 44 Republicans and all but two Democrats.

“There’s one question left today: Do Senate Republicans join with the rest of America in supporting $2,000 checks?” Schumer said on Tuesday.

McConnell’s next move is unclear, but linking Trump’s three demands would likely sink the stimulus checks. Democrats have been highly critical of Republicans’ baseless claims that there was widespread voter fraud in the 2020 election. They are also likely to oppose a GOP effort to alter or repeal Section 230 of the Communications Decency Act, something Trump has advocated to punish companies like Facebook and Twitter for what he argues is a bias against conservatives.

Sen. Bernie Sanders expressed frustration with McConnell’s suggestion that he wouldn’t hold a stand-alone vote on the stimulus checks.

“The House passed, to their credit, a simple, straightforward bill. Let’s not muddy the waters,” Sanders told reporters on Capitol Hill on Tuesday. “Are you for $2,000, or are you not? Let’s not talk about so-called voter fraud or abortion or anything else. That’s what the American people want to know: Which side are they on right now?”

McConnell’s move is the latest in a protracted and tumultuous debate over whether the federal government should send Americans a second round of stimulus checks as the COVID-19 pandemic continues to rage across the country and public-health officials warn the worst days are yet to come.

Trump’s demand for more generous direct payments than the $600 checks in the $900 billion COVID-19 relief package puts Republican lawmakers, who have cited the national debt in their opposition to larger checks, in a tricky position.

It’s politically dangerous for many Republicans to break from Trump. Illustrating the influence Trump maintains among GOP voters, Sens. Kelly Loeffler and David Perdue, the Georgia Republicans facing runoff elections on January 5, both announced on Tuesday that they’d support $2,000 payments. Their Democratic opponents, the Rev. Raphael Warnock and Jon Ossoff, have also said the $600 direct payments are too small.

The Georgia elections will determine control of the Senate — Republicans need to win only one of the seats to maintain their majority.

Several Republican senators, including Marco Rubio of Florida, Lindsey Graham of South Carolina, and Josh Hawley of Missouri, have recently expressed support for the $2,000 checks.

But many have continued to voice opposition to larger direct payments. On Tuesday, Sen. Jim Inhofe of Oklahoma called $2,000 “such a big number” and said he’d “have a hard time supporting that.” Sen. John Cornyn of Texas told reporters that Trump’s focus on expanding the direct payments “undermines the very positive impact” of the $900 billion relief package.

Sen. Susan Collins of Maine said that the stimulus checks shouldn’t be lumped in with other issues like Section 230 and that she had concerns about $2,000 payments benefitting higher-income Americans.

“For example, for a family of four, the income level at which you would get nothing is more than $300,000, and in a state like mine, that’s high income,” she told reporters on Tuesday. “So I don’t know whether it’s possible to put a cap on it or make some changes, or whether this is going to be an all-or-nothing boat.”

Trump refused to sign Congress’ $900 billion relief bill for nearly a week while demanding that the legislation include larger direct payments and cut out foreign aid. As he signed it on Sunday, he claimed the Senate would hold a vote on the $2,000 checks and a few other pet issues of his. But McConnell didn’t mention any of Trump’s demands of the Senate in his statement after the president’s signing.

The president tweeted twice about the checks on Tuesday, demanding that Senate Republicans “get tough!”

“Unless Republicans have a death wish, and it is also the right thing to do, they must approve the $2000 payments ASAP. $600 IS NOT ENOUGH!” he wrote. “Also, get rid of Section 230 – Don’t let Big Tech steal our Country, and don’t let the Democrats steal the Presidential Election.”

But Senate Republicans have consistently opposed even the $1,200 direct payments Democrats had pushed for. House Minority Leader Kevin McCarthy blocked a previous effort by Democrats to pass the $2,000 checks, and a slew of Trump’s closest allies in the House voted against the CASH Act on Monday.