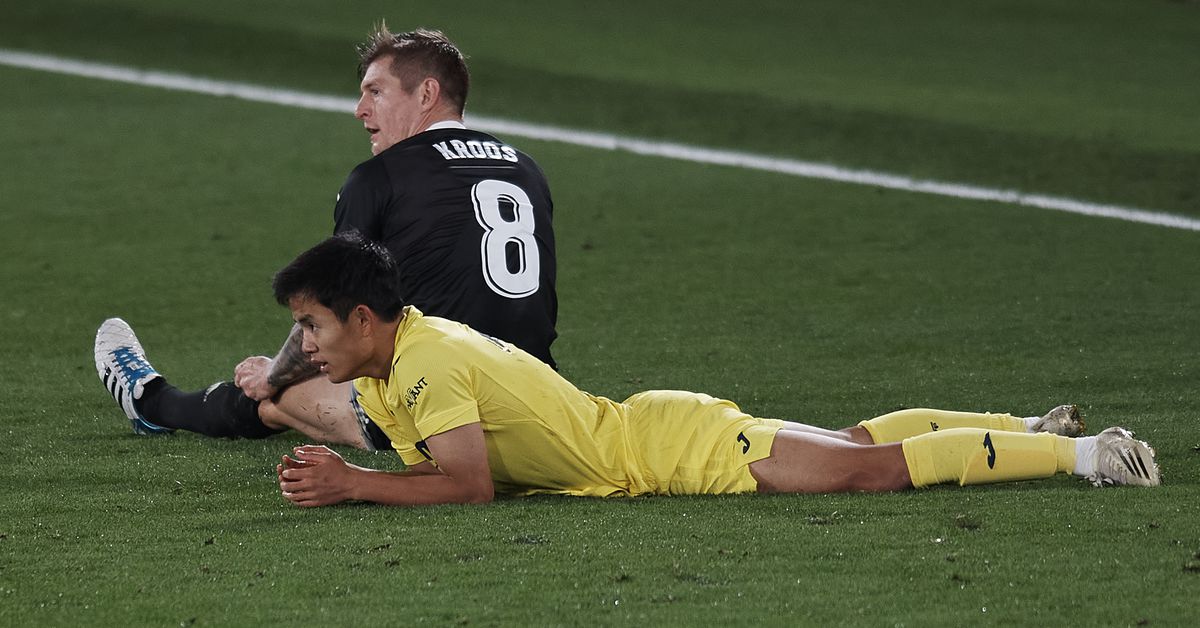 Real Madrid earned a 1-1 draw away at Villarreal on Saturday afternoon, managing to bring a point back to the Spanish capital from a trip with many absences and against a tough opponent. Before thoughts turn to Inter, here’s a look at some of the main talking points from this weekend’s league outing.

1. Would Carvajal, Varane, Nacho and Hazard be 100 percent?

Zinedine Zidane does not like to use player when they’re not 100 percent. He has stated that on several occasions and his actions have backed up those words time and time again. But, in this game his hand was forced with some of his selection decisions given that he had seven key absences for this trip. So, Dani Carvajal, Raphaël Varane and Nacho all came back from their recent injuries perhaps a little sooner than Zidane would have liked and Hazard, although he has recovered from COVID-19, still came into the match with that lingering apprehension about his right ankle. The first trio all played well and looked fit, doing a good job in defence for most of match until the energy of Villarreal’s substitutes proved too much. Hazard, meanwhile, was quiet and largely uninvolved. In the first half, there was some beautiful low angle camera work of the Belgian gracefully receiving the ball with the sun above him, but that’s about all I cam remember from him in this game. It was the kind of quiet performance that his critics will pounce on.

2. Would it be a double pivot to replace Casemiro?

There were so many absences, but most areas of Zidane’s line-up were still fairly simple to work out. We knew Mariano would likely start up top, flanked by two wingers. We knew there would be a back four. It was in midfield that the biggest question marks popped up. How would Real Madrid deal with the absences of Casemiro and Fede Valverde? Would there be a double pivot to replace the Brazilian, since one man alone can’t do what Case does? Well, the answer was… sort of. Toni Kroos and Luka Modrić did play side by side, with the German on the left and the Croat on the right, while Martin Ødegaard was allowed to roam further forward. But, Modrić got forward a lot too, sometimes playing around 10 metres in front of Kroos. There’s just no like-for-like replacement for Casemiro when he’s missing.

3. How much would we see off Takefusa Kubo?

All season long, the guys on the Loan Tracker podcast have been following Villarreal matches to watch Takefusa Kubo. They’ve not always seen much of the Japanese youngster, though, who’s on loan at the Estadio de la Cerámica this season from Real Madrid. Unai Emery has been cautious with the 19-year-old, who has strong competition in the form of Samu Chukwueze and Moi Gómez. It took, therefore, until the 89th minute of this one for Kubo to come on and he was very good in those final few minutes, even coming close to scoring a winner. He’s only played 36% of the available minutes so far this season – 427 out of 1,170. But, his minutes will increase as the season goes on and we should keep in mind that he only returned from Japan international duty on Thursday this week.

1. When will Mariano next get a start?

For the first time since May 5th 2019, Mariano started for Real Madrid. He only did so because Zidane had no other option, with Karim Benzema injured and Luka Jović having COVID-19. But, Mariano did what Mariano does. He scored. It took just 105 seconds for Mariano to open the scoring in this one, meaning that the striker averages a goal for Real Madrid every 99 minutes, basically a goal per game. He does what Jović doesn’t do, so when will Mariano start again? Hopefully not another 18 months…

2. Were the Villarreal players right to be annoyed by the linesman’s flag at the first goal?

After two weeks of no club football, Real Madrid returned with some immediate controversy. Mariano’s goal sparked outrage among the Villarreal player’s because the linesman raised the offside flag in the build-up and half of the Villarreal defence stopped in their tracks. What happened was Dani Carvajal was trying to play the ball to an offside Lucas Vázquez, but Alfonso Pedraza blocked the pass. As the ball returned to Carvajal, the assistant raised the flag because a new phase of play was started and he’d seen an offside in the previous piece of play. But, the main referee Alejandro Hernández Hernández didn’t blow the whistle. Play continued and Carvajal crossed for Mariano to score. Whether it was an offside or not is subjective in this case; it depends on whether or not Lucas can be judged to have been sufficiently involved or not. That’s why, personally, I believe Hernández Hernández should have went to look on the VAR monitor, which he didn’t. So, that’s a fair complaint from the Villarreal players. Their other issue was with the flag going up and distracting the defence, but one of the first things you’re taught in any sport is to play to the whistle. It’s unlucky for Villarreal because the flag going up usually brings about the whistle, but there was none this time. The fact they switched off is on them.

3. Will Ferland Mendy ever lose a LaLiga game?

Given that Carvajal, Nacho and Varane all came into this match after recent injuries, Ferland Mendy was certainly the freshest player in the back line. He hadn’t been away on international duty and, to everyone’s surprise, he hadn’t played a single minute in the Valencia defeat before the break. So, he was ready to go and he was brilliant. The French left-back is just so good at everything he does and he acted as a leader in this difficult away trip. A point away at Villarreal is not to be sniffed at. In coronavirus times, you shouldn’t be sniffing at anything. And this result keeps up Mendy’s impressive record of never having lost a domestic match that he started since arriving at the Bernabéu. Real Madrid have suffered six defeats in LaLiga or the Copa del Rey since Mendy arrived last summer and he has been on the pitch for just 31 minutes of those six losses, having come on as a sub when Los Blancos were already down 2-0 at Real Betis last season. He didn’t feature at all in the defeats to Real Mallorca, Real Sociedad, Levante, Cádiz or Valencia. Will he ever lose?