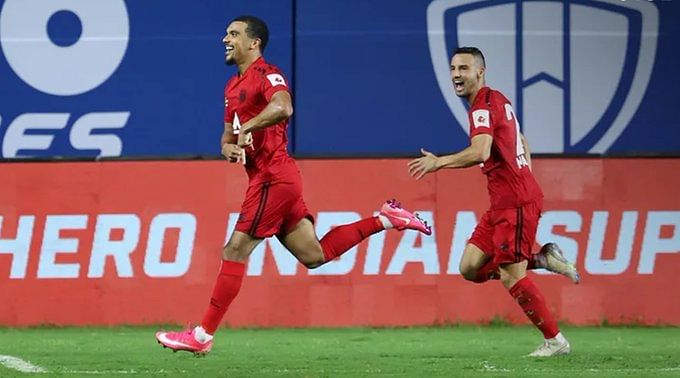 Jahouh was the fulcrum for Mumbai in midfield but a rash challenge on NorthEast’s Khassa Camara led to him being shown a straight red card by the referee just minutes before the end of first half.

Gerard Nus’ men capitalised on their numerical advantage soon after the restart. The Highlanders were awarded a penalty in the 49th minute when the ball struck Rowlin Borges’ arm after Dylan Fox had headed in a short corner. Appiah sent Mumbai goal-keeper Amrinder Singh in the wrong direction to take his team ahead.

With Mumbai now under pressure, NorthEast took control over the game with Khumanthem Meetei and Appiah making regular inroads into their rivals’ territory. Lobera made a tactical change replacing Ogbeche with Stephen Goddard, giving Le Fondre a central role up front.

Mumbai had a rare opportunity in the 65th minute when Sarthak got his head to a cross, but his effort sailed inches over the bar. Lobera’s team kept knocking on the door in the final quarter, but an equaliser eluded them.