A day after Virat Kohli turned 32, his wife Anushka Sharma took to social media and shared some adorable clicks. Anushka Sharma posted a couple of pictures with the Team Indian captain on Instagram, captioning the post with a heart emoji. In the pictures, Anushka can be seen giving a hug in one while in the other she plants a kiss on her husband’s cheek. The post was massive hit on on Instagram, with numerous celebrities, including Bollywood actor Priyanka Chopra, and fans reacting to the post.

Bollywood actor Priyanka Chopra reacted with a trio of emojis. 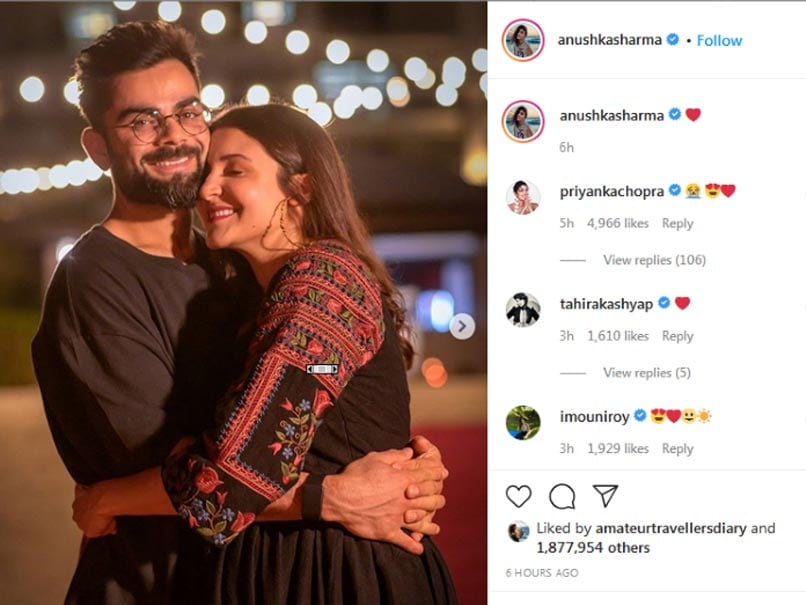 Virat Kohli and Anushka Sharma got married in 2017 after dating for several years. They announced earlier this year that they are expecting their first child in January 2021.

On Thursday, RCB took to social media to wish their captain on his birthday.

“To the man who’s given blood, sweat and tears to the Red and Gold. To our Leader and Legend, Here’s wishing KING KOHLI a very Happy Birthday!!” they wrote in their post.

Virat Kohli has scored 460 runs from 14 games this season, helping his team finish fourth in the points table and seal a berth in the playoffs.

His best performance was an unbeaten 90 against Chennai Super Kings, which helped RCB register a crucial win.

RCB will next take on SunRisers Hyderabad in the Eliminator on Friday.

Mumbai Indians thrashed Delhi Capitals by 57 runs in Qualifier 1 and now the winner of the Eliminator will play Delhi on Sunday.

Virat Kohli and RCB are chasing their maiden IPL title.