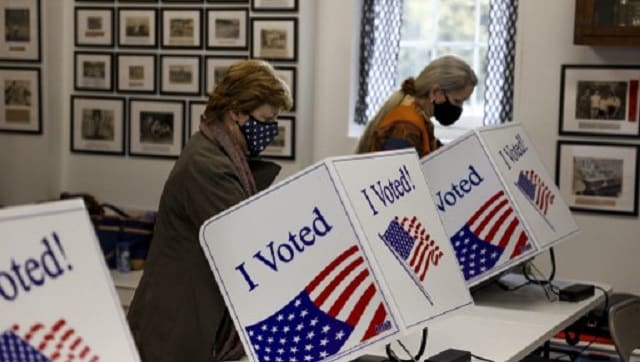 Trump is leading in Louisiana, Virginia and Nebraska.

The Associated Press predicted win for US President Donald Trump in the state of Kansas. The Republican nominee on Tuesday was awarded its six electoral votes.

In 2016, Trump coasted to victory over Democrat Hillary Clinton by 20 percentage points in the state.

The AP has declared Joe Biden to be the winner of Colorado and its nine electoral votes.

The state, which went for Democrat Hillary Clinton four years ago, has trended sharply to the left since President Donald Trump’s 2016 election.

Biden’s electoral vote count now stands at 131, meaning he is about halfway to the 270 votes needed for victory.

US President Donald Trump has taken Nebraska, Louisiana, Wyoming, South Dakota and North Dakota, according to the latest projections put out by The Associated Press.

Ohio, with 18 electoral votes, is another State that is a toss-up between the two candidates. Donald Trump had famously crossed swords with the State’s star NBA player LeBron James, after the latter called the US President “divisive.”

In classic Trump fashion, he took to Twitter to express his displeasure. “Lebron James was just interviewed by the dumbest man on television, Don Lemon,” Trump posted. “He made Lebron look smart, which isn’t easy to do.”

All eyes on Florida

As projections are released for the smaller states which usually vote along either Republican or Democrat, all eyes are now on the swing states. Trends are coming in for Florida, Georgia and North Carolina, and it looks too close to call.

The New York Times reported “Florida is a critical part of almost any Electoral College pathway for Trump to hit the 270 votes needed to secure re-election. Biden is seen to have multiple paths without the state.”

Nebraska, one of two states that divides its electoral votes, has five total electoral votes up for grabs. Trump won the statewide vote, which is good for two electoral votes. He also won the 3rd Congressional District, which nets him a third vote.

Polls close in more than a dozen states

Polls have now closed in more than a dozen states, including the key swing states of Arizona, Michigan and Wisconsin.

Joe Biden had a polling advantage in Michigan and Wisconsin, but it may take a while to count absentee ballots in those two states. Arizona is expected to post results more quickly.

Scott has distanced himself from Donald Trump, previously announcing he intended to vote for Joe Biden. Explaining his Biden vote earlier today, Scott said, “We need someone that can pull us together. Our country needs to heal.”

“We need someone that can pull us together.”

Trump gets Alabama, Mississippi: US media

Stan Swamy, 83, waits as the buck is passed on his sipper and straw – The Indian Express