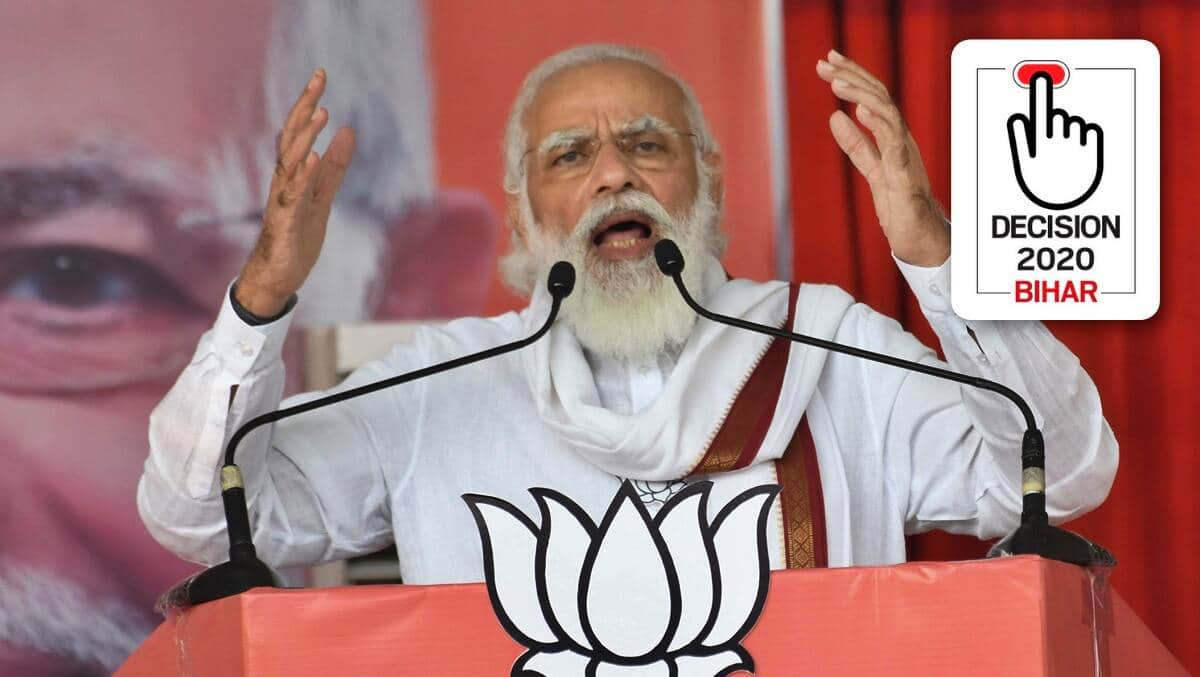 PM Narendra Modi at a rally in Saharsa district. (PTI)

Bihar Election 2020 Live Updates: Exuding confidence to win the ongoing Bihar Assembly ekections, Prime Minister Narendra Modi on Wednesday said the youth and women of bihar see hope in NDA as they prefer good governance. “Poor of Bihar know their ‘sevak’ from a backward society and born in poverty is ensuring that not a single poor sleeps hungry,” he added. He also mentioned that every Bihari has always been vocal for local and NDA is committed towards taking that identity to national and global state.

Earlier in the day, Congress leader Rahul Gandhi had hit out at his political rivals in Bihar saying PM Modi and Bihar CM Nitish Kumar, who did not help the distressed during the coronavirus lockdown, are now seeking votes from them. Speaking at a campaign rally in Bihar’s Araria, he added that whether it’s Modi Voting Machine or Modi ji’s media, he is not scared of them, Grand Alliance will win. Follow #Politics LIVE updates

Over 53 per cent of the total 2.85 crore electors in 94 constituencies of Bihar exercised their franchise in the second phase of voting on Tuesday, according to Election Commission data. Prominent personalities including Chief Minister Nitish Kumar, his deputy Sushil Kumar Modi, Tejashwi Yadav, and LJP president Chirag Paswan cast their votes in their respective polling booths. The next phase is scheduled to be held on November 7. (Click here to follow our full Bihar election coverage)

On Tuesday, a video of an onion being thrown at the Bihar Chief Minister went viral while he was addressing a rally in Madhubani’s Harlakhi area. While it did not reach Nitish, his security staff rushed to shield him. However, reacting to this, Tejashwi said the incident was entirely undesirable and against the spirit of democracy. He said in a democracy, the way to register opposition to a leader was by exercising the right to vote.

As focus shifts to the third phase of the Bihar elections, where the Seemanchal region in Bihar’s north-east, with a sizeable minority community, will go to polls, Chief Minister Nitish Kumar reached out to Muslims in rallies on Wednesday, reminding people that his government had increased salaries for teachers in madrasas, and attempted to allay fears over Citizenship Amendment Act (CAA).

In a region that saw widespread protests against CAA, Kumar said he had worked to spread love, peace and brotherhood, and nobody had the strength to “send anyone out of the country.” Read more 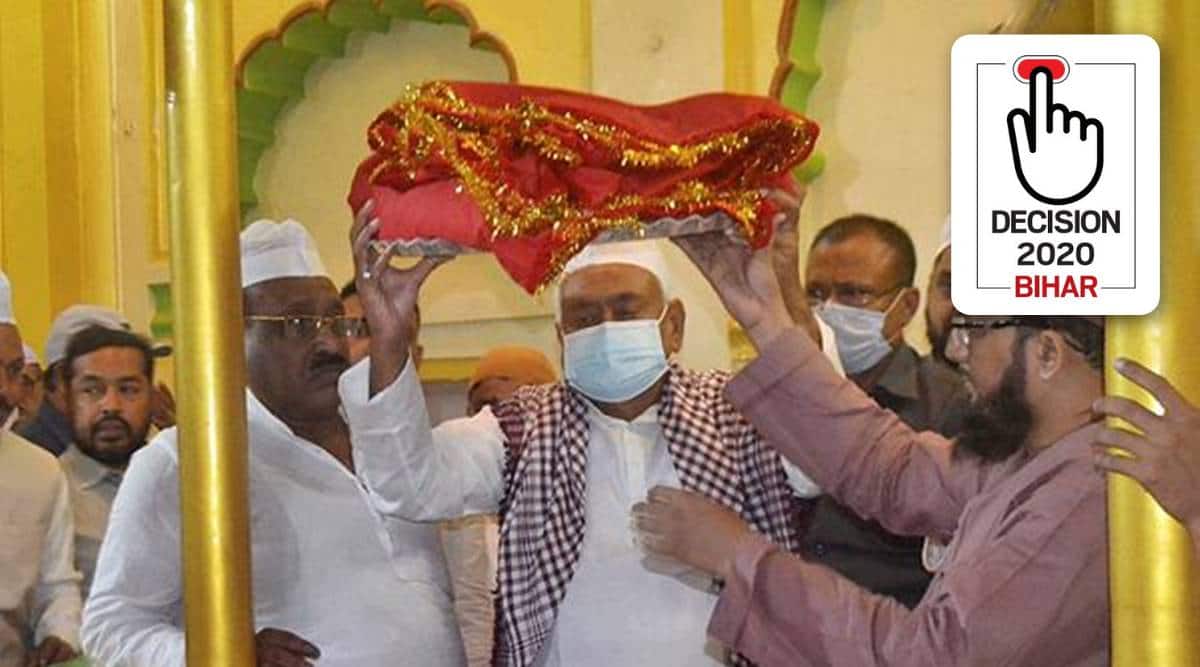 From Nitish-baiting at his rallies to the caste-wise breakup of candidates to criminal cases against those in the fray in the second phase, today’s update on the Bihar elections.

PM Modi said that the people of Bihar prefer politics of good governance; Youth and women of Bihar see hope in NDA.
“Every Bihari has always been vocal for local; NDA committed to take this identity to national and global stage,” he added. “Poor of Bihar know their ‘sevak’ from a backward society and born in poverty is ensuring that not a single poor sleeps hungry.”

Takign to Twitter, Narendra Modi said, “Every district of Bihar which has products which their own identity. Food products, fruits, vegetables, painting-handicrafts are associated with the identity of Bihar. Every Bihari has always been a vocal for the local. The NDA is committed to taking this identity nationally and internationally.”

Speaking at a campaign rally in Bihar’s Araria, Rahul Gandhi said whether it’s Modi Voting Machine or Modi ji’s media, he is not scared of them. “Grand Alliance will win,” he added.

“Both Rahul Gandhi & Tejashwi Yadav were sitting in Delhi during Covid-19 pandemic as they were scared of Corona. And now they ask what happened in Bihar during Corona. Only CM Nitish Kumar & BJP workers took care of Bihar public during pandemic,” said BJP National President J P Nadda.

Both Rahul Gandhi & Tejashwi Yadav were sitting in Delhi during #COVID19 pandemic as they were scared of Corona. And now they ask what happened in Bihar during Corona. Only CM Nitish Kumar & BJP workers took care of Bihar public during pandemic: BJP National President J P Nadda https://t.co/YHsZHTpmqS pic.twitter.com/R3i3pgWnK0

Yogi Adityanath Wednesday said at a gathering in Bihar, “Congress was in power and supported by RJD when Mumbai terror attack took place. People wanted Pakistan to be taught a lesson, but Congress got scared.”

“After Pulwama attack, PM Modi said we’ll avenge death of our soldiers and we did it by going inside Pakistan. Can Congress do it,” Adityanath asked. (ANI)

UP CM Yogi Adityanath at a rally in Bihar

All bets are off in what is seen as a dead-heat election, with many still giving CM Nitish Kumar a chance to fight back three terms of anti-incumbency. But for Tejashwi Prasad Yadav and the RJD, this is a poll that will mark the emergence of the young man from the larger-than-life shadow of his father Lalu Prasad.

If crowds at rallies could win elections, Tejashwi is the clear winner. Almost every rally of his has drawn huge crowds of young men who follow him in a wave to the stage and cheer wildly as he speaks. And when he talks of his oft-repeated promise of 10 lakh government jobs, the crowd is almost delirious. Under Tejashwi, the RJD has clearly travelled far from its days in 2017, when it reportedly put up a photoshopped photograph of its Gandhi Maidan rally to exaggerate the numbers.

Congress leader Pawan Khera says, “‘Bharat Mata ki Jai’ is not just a slogan, but a responsibility but it is beyond Modi’s understanding because he has made it a weapon to ask for votes.”

Tejashwi Yadav Wednesday addressed a rally in Bakhtoyarpur where he was seen raising the slogan: “Chup Chaap, laalten Chhap”.

Congress leader Rahul Gandhi, during poll rally at Bihar’s Madhepura, showers praise on LJD chief Sharad Yadav, says he got to learn a lot from the veteran politician

Yogi Adityanath says, “The people of Bihar are worthy of recognition that they’ve come out to vote in this election amidst the COVID pandemic. I’ve come here to especially appeal to you to exercise your franchise in the 3rd phase of Bihar polls.”

The people of Bihar are worthy of recognition that they’ve come out to vote in this election amidst the COVID pandemic. I’ve come here to especially appeal to you to exercise your franchise in the 3rd phase of #BiharPolls2020 (Nov 7): UP Chief Minister Yogi Adityanath, at Katihar pic.twitter.com/DQ6iQizrbu

Congress leader Rahul Gandhi is addressing a rally in Bihariganj. He will later hold another rally in Araria in the afternoon today.

Bihar Chief Minister and JD(U) chief Nitish Kumar will address six rallies today — two in Kishanganj, two in Araria and one each in Saharsa and Madhepura. Below is his schedule for today. 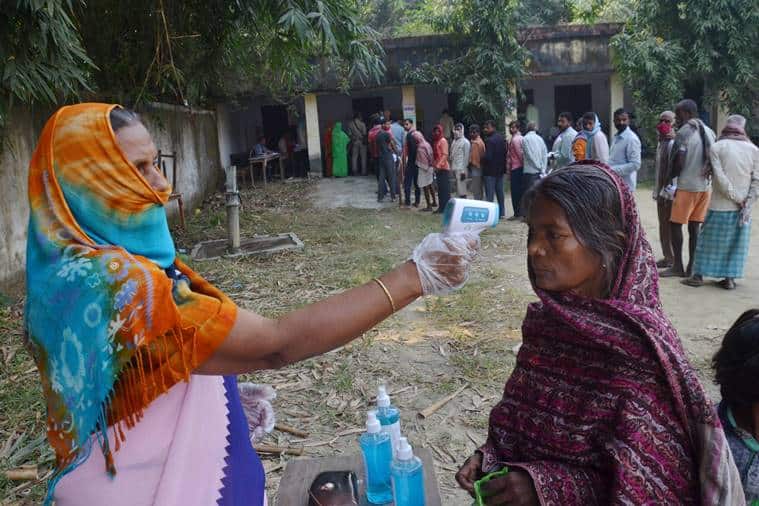 Voters undergo thermal screening at a polling station as they arrive to cast their votes for the second phase of Bihar Assembly Elections, in Muzaffarpur district, Tuesday, Nov. 3, 2020. (PTI Photo)

Addressing an election rally at Bihariganj, Congress leader Rahul Gandhi attacked the two NDA leaders, Narendra Modi and Nitish Kumar over job creation. He said that Kumar had promised he would provide jobs to the youth and “change” Bihar, but he could not deliver. “When youths today ask Kumar during his public meetings about the jobs he had promised, he threatens them, chases them away and gets them thrashed,” Gandhi alleged.

Prime Minister Narendra Modi sharpened his attack on the RJD-led Grand Alliance and said on Tuesday that those who brought “jungle raj” to Bihar and their allies didn’t want people to chant “Bharat Mata ki jai” or “Jai Shri Ram”.

Once upon a time, Bihar’s other Yadav brothers

The tenure of Lalu Prasad and Rabri Devi as chief ministers remained in news both for in-laws and outlaws. When Lalu got married to Rabri from Gopalganj, his in-laws were in fact financially better off, and Lalu was ostensibly picked for his political future.

Once Lalu became CM, and more specifically, after Rabri took over the post, Bihar saw the rise of her brothers Anirudh Prasad alias Sadhu Yadav and Subhash Yadav. The RJD chief gave Sadhu two terms as MLC on sports quota in the mid-1990s, and in the 2004 Lok Sabha polls, Sadhu stood from the Gopalganj seat and won, even as Subhash was nominated to the Rajya Sabha same year.

Bihar: ‘Waited years for bijli, can’t wait for everything’

Around 10 km from Bhagalpur city, the Yadav-dominated twin village of Koyli-Khutaha is affluent by usual standards. Houses are mostly all pucca, motorcycles and SUVs are parked outside many of them, and several bikes bear the blue and red colour number plates used by Bihar Police personnel. But this affluence stops at the door steps: overflowing drains, the absence of a health centre and proper school, and a bank or even an ATM, mark the two hamlets of over 10,000 people, which have hundreds in the Army and police.

There is one aspect though in which Koyli-Khutaha’s story is distinct from other Bihar villages. In April 1991, the two clashed over installation of electricity poles. In the 30 years since, violence over the issue, latest in 2019, has left 20 dead, and 27 sentenced to life.

Among the major political parties, Chief Minister Nitish Kumar’s JD(U) is contesting in 35 of the 71 seats, followed by its ally BJP (29), while the opposition RJD has fielded its candidates in 42 and its coalition partner Congress is in the fray in 20 assembly segments.

Lok Janshakti Party, headed by Chirag Paswan, is in the fray in 41 seats, which include all the 35 contested by the JD(U), in keeping with the call given by the young party president, who recently pulled out of the NDA in the state, to “dislodge” the chief minister from power.

Other prominent leaders who have campaigned in the state so far include Union ministers Rajnath Singh and Smriti Irani, Congress leaders Raj Babbar and Shatrughan Sinha, BSP supremo Mayawati and AIMIM chief Asaduddin Owaisi. CPI’s Kanhaiya Kumar also joined the campaign, mainly for candidates of the Left parties. Kumar, in an interview, told Indian Express that Bihar elections are not going to be one-sided and there is much anger, especially against Chief Minister Nitish Kumar.

Also Read: His base shrinking, Nitish hopes voter cheering Modi will carry him along