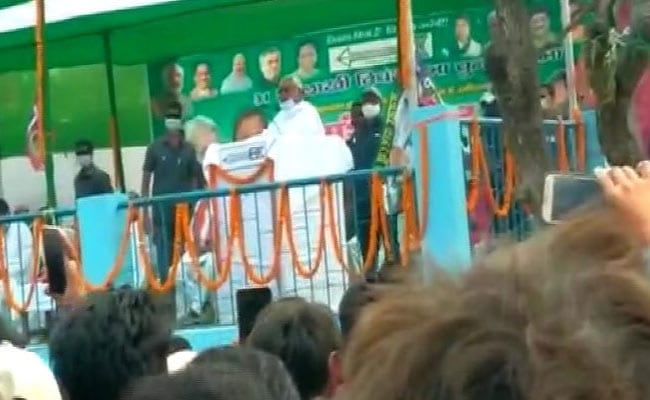 A few weeks ago, Nitish Kumar lost his temper and lashed out when he was heckled at a rally.

Onions were thrown at Nitish Kumar when he was campaigning today in Bihar’s Madhubani for the state election ending Saturday. The Chief Minister’s security personnel formed a shield around him as he continued his speech.

Nitish Kumar was talking about providing jobs when onions came flying at him at a rally in Harlakhi in Madhubani, but missed him.

When the attacker was apparently caught by security personnel, he said: “Let him go, don’t pay any attention to him.”

Nitish Kumar then resumed his speech, targeting opposition leader Tejashwi Yadav and accusing his parents Lalu Yadav and Rabri Devi, both chief ministers over a 15-year period, of ruining Bihar.

Nitish Kumar, 69, is facing a difficult election as he aims for a fourth straight term in Bihar amid glaring signs of anti-incumbency. The Chief Minister and a few ministers have faced anger during their rallies.

A few weeks ago, Nitish Kumar lost his temper and lashed out when he was heckled at a rally in Chhapra. Hearing slogans of “Lalu Yadav zindabad“, he said: “Raise your hand, whoever is speaking such anap-shanaap (nonsense). Don’t do halla (chaos) here. If you don’t want to vote for me, then don’t…You will destroy the votes of the man for whom you are here.”

What is also troubling for the five-time Chief Minister is the apparent public response to Tejashwi Yadav’s rallies. These have been marked by sizeable crowds and massive cheering when the 31-year-old Rashtriya Janata Dal (RJD) leader – the opposition’s chief ministerial candidate – talked about his promise of jobs, though the BJP says crowds mean nothing.

After the final round of voting on Saturday, the Bihar election results will be declared on November 10.