Explained: A guide to tracking the results of the US Election 2020 – The Indian Express 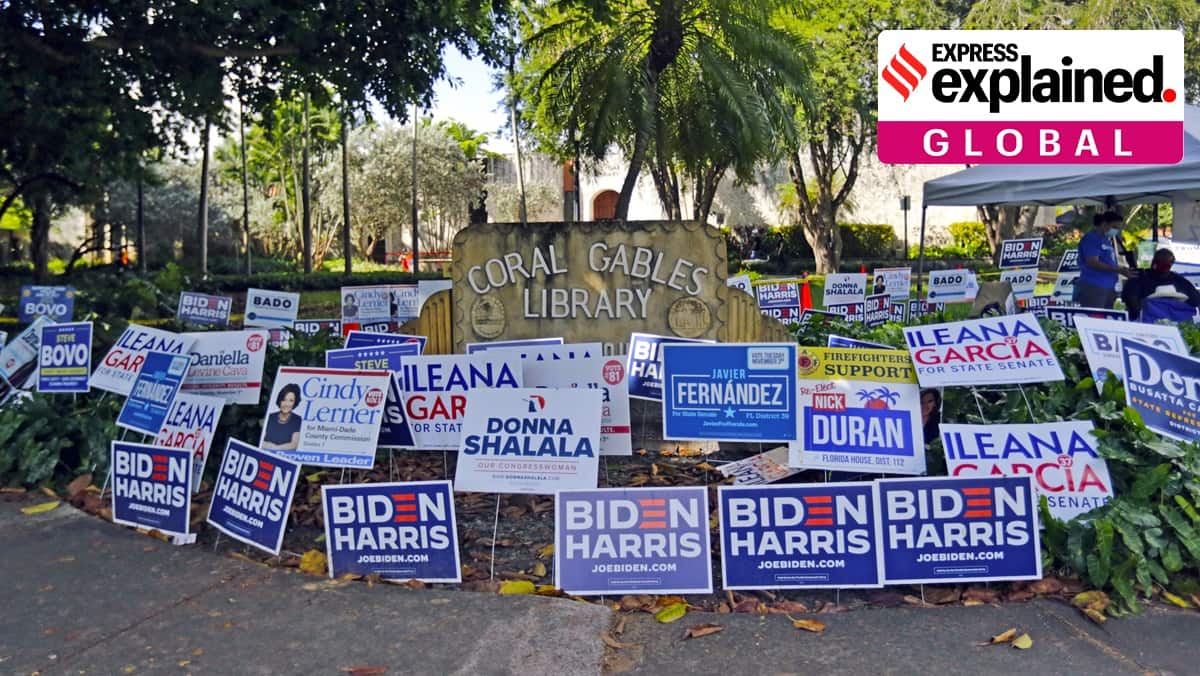 Campaigning signs outside the Coral Gables Library to cast their vote during the last day of early voting for the general elections on Sunday, Nov. 1, 2020, in Coral Gables, Fla. (AP Photo)

The election of the President of the United States is considered the world’s most consequential democratic exercise. This is especially true of Election 2020 — as the US is more divided than at any other time in its recent history, the planet faces an existential threat from catastrophic climate change, new geopolitical forces are threatening to upend the balance of global power, and a once-in-a-century pandemic has delivered a shock to economies.

Tomorrow, November 3, is a momentous day — for the US and the world.

As Election Day and Night unfolds, the battle for the 270 Electoral College votes needed to win the White House will boil down to how President Donald Trump and his Democratic challenger, former Vice President Joe Biden, perform in what are called the “battleground” or “swing” states. But there is a real possibility that the result of the election may be delayed — and that there is no clear winner until late on Election Night. A long-drawn-out legal battle may follow and, in the worst case scenario, potential violence and unrest in the streets.

As you watch the election, look out for what happens in the battleground states — and keep in mind that the drama you see may actually last longer than just one night.

Why are battleground states important?

Battleground or swing states hold the key to a candidate’s fate. These are called swing states because they have a history of swinging back and forth between the two main political parties, the Republicans and the Democrats. To use an example from India, an American swing state would be like the state of Kerala — which has swung between the Left and the Congress in elections.

Swing states have populations that are almost equally divided politically. Presidential candidates often focus all their energies on these states, sometimes skipping altogether the solid blue (Democratic) or red (Republican) states that are expected to inevitably go one way or the other. Both Trump and Biden have targeted these states during their campaigns. 📣 Express Explained is now on Telegram

Assessment by The New York Times 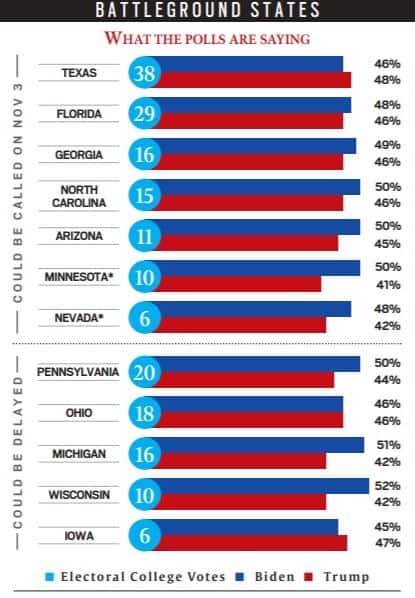 What the polls are saying

Analysts identify 10-12 states as battlegrounds in US Presidential Elections. For the election of November 3, the toughest battles are likely to be fought in six of these. The Cook Political Report identifies Arizona (11 Electoral College votes), Florida (29), Michigan (16), Pennsylvania (20), and Wisconsin (10), as toss-ups. Most analysts also throw North Carolina (15 Electoral College votes) into the mix.

The biggest swing state is Florida — it is also among the most sharply politically divided states in the US. Florida swings between the major parties — Democrat Bill Clinton carried the state in 1996, Republican George W Bush in 2000 and 2004, Democrat Barack Obama in 2008 and 2012, and Republican Donald Trump in 2016. The ‘Sunshine State’ is special also because it is seen as a bellwether state — except for 1992, when it sided with incumbent George H W Bush, Florida has voted with the winning candidate in every election from 1964 (Lyndon B Johnson) to 2016 (Trump).

In beating Hillary Clinton, Trump also won Pennsylvania, Michigan, and Wisconsin, albeit with small margins. This time, analysts feel Pennsylvania will be the “tipping point”.

The complication is this: three of the battleground states — Pennsylvania, Michigan, and Wisconsin — will not begin counting early votes until Election Day, which means it is likely that final results and projections will not be possible that night. But North Carolina and Arizona have begun counting ballots, and these states are likely to be called on Election Night.

Why is there such uncertainty around the election?

Much of the uncertainty stems from the fact that the election is taking place in the middle of the pandemic, which has killed over 231,000 Americans, and fundamentally altered voting behaviour and the context of the election.

A large number of voters — over 96 million until Monday night in India — have voted through mail-in ballots and early voting (to avoid the crowds on November 3). Because of the time taken in receiving, processing and counting the large numbers of postal votes (see FAQs), and the fact that projections may not be possible in several battleground states, a clear winner may not emerge on Election Night. Election officials in swing states like Pennsylvania and Michigan have said they hope to finish counting within three days.

The one way one can hope for a quick result on Election Night is if one side wins by a landslide — racing to 270, and making the counting of votes in individual states irrelevant.

Also read | When can we expect 2020 US Election results?

But it that does not happen, and Trump decides to contest the outcome — his campaign has already prepared legal teams to fight in case of a close call and he loses by a slim margin — the courts will come into play.

Trump has already said that he would want the Supreme Court to play a proactive role in case of a disputed election. The hurried confirmation of Justice Amy Coney Barrett to the Supreme Court literally days before Election Day was aimed at a full nine-justice court with a clear conservative bias, which Trump would be hoping would adjudicate in his favour.

If Election Night drags into days and weeks — following litigation — the situation could become messier, and apprehensions have been expressed about a law and order situation.

There is been no precedent of a President refusing to concede the election. But Trump is different — he has never confirmed he would accept the election result if he loses, and that is the reason many fear the transfer of power, should the contest be tight and Trump loses narrowly, may not be peaceful.

For all the latest Explained News, download Indian Express App.