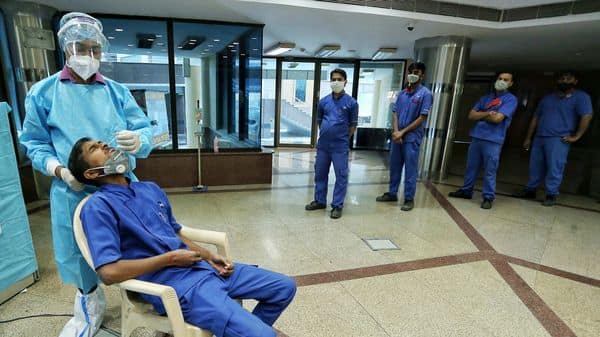 With 6,725 new Covid-19 cases recorded in the last 24 hours, Delhi witnessed it’s highest single-day spike since the outbreak on Tuesday. Daily cases in the national capital crossed 6,000 for the first time.

The total tally after today’s record spike in cases surged past 4 lakh-mark to 4,03,096, according to Delhi government data.

Along with that, a total of 48 virus-related deaths were reported since Monday, taking the number of fatalities to 6,652, it added.

Amid the sudden surge in cases in the past few days, the Centre on Monday reviewed the situation of the pandemic spread in the national capital and decided to concentrate efforts in certain key areas, such as targeted RT-PCR Covid-19 testing in sensitive and critical zones such as restaurants, market places, barber shops / salons, etc, among other things.

The recent surge in the number of active cases was attributed to the festival season, which has witnessed greater movement of people, accompanied by laxity in adhering to the basic principles of safe COVID behaviour, MHA said in a statement.

The strategy to contain spread of COVID-19 in Delhi, especially keeping in view the festival season and decreasing temperatures accompanied by rising pollution was discussed at length with representatives of MoHFW and the health experts who were present in the meeting.

Meanwhile, the Union Health Ministry on Tuesday said Kerala, Delhi, West Bengal and Manipur have shown a rise in the number of active COVID-19 cases between October 3 and November 3, while Maharashtra, Karnataka, Tamil Nadu and Uttar Pradesh were the top states which registered a decline in active infections during the same period.

At a press briefing, Union Health Secretary Rajesh Bhushan said there has been a continuous decline in average daily new COVID-19 cases as well as deaths for the last seven weeks, because of which “healthcare systems were not unnecessarily burdened and there was less pressure on hospitals”.