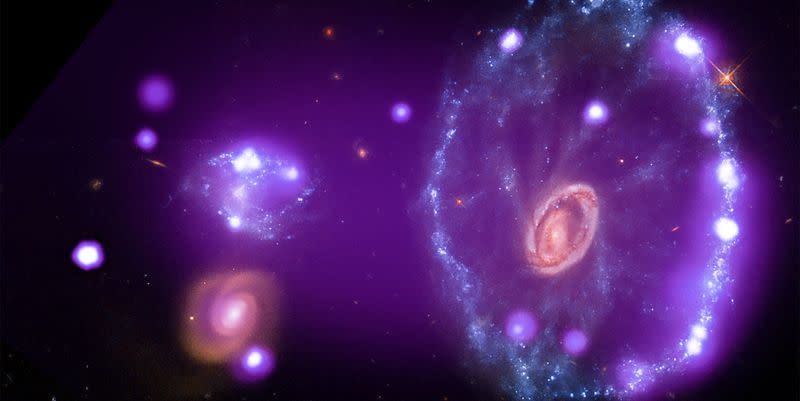 I’m The Woman Who Helped Discover Water On The Moon

This week, NASA came out with huge news: There is water on the moon. No, it’s not drinkable — yet. But it’s a massive discovery, and one that has huge implications for the future of deep space exploration.
Crucial in this discovery was NASA’s Stratospheric Observatory for Infrared Astronomy, aka SOFIA, a Boeing aircraft that’s been modified to function as an astronomical observatory. And the NASA project scientist for the SOFIA mission is a woman named Naseem Rangwala, PhD.
Dr. Rangwala, an astrophysicist, spoke with Refinery29 about what it’s been like to work on the SOFIA (“so much fun,” for the record) and make discoveries that turn our understanding of the cosmos on its head.
This interview has been edited and condensed for clarity.
Refinery29: How did SOFIA get tasked with finding water on the moon?
Naseem Rangwala: “A lunar scientist — who is now the lead author of this paper — wanted to definitively confirm water on the moon using SOFIA. That was something that we had not looked at before. Normally we study distant and much dimmer objects, like black holes and galaxies or star clusters.The moon is much brighter and moves much faster than these distant objects, which are fixed. So we would have to maneuver the telescope in a very different way than we have done previously. We also did not know if the instrument we were using to measure the chemical fingerprint of water would [work]. This is why we scheduled this test, which led to the discovery.”
Can you explain why this discovery is such a big deal? What are the implications of water being on the moon?
“Water is a critical resource for deep space exploration. We want to know everything we can about water on the moon to support the ultimate goal of establishing a sustainable human presence. On Earth it is so easy, because you can get to a destination and get water and food. You don’t want to carry water and other resources with you, because it’s very heavy. So we really want to figure out a way to extract water at the destination. And the moon is the starting point for us.”
When did you realize that the SOFIA test worked?
“The first hurrah moment was on the plane, when they finally saw the image of the moon in the guide camera, and they saw data coming through that looked promising. That was in August 2018. But at that point, you don’t know if there is a definitive detection — you have to analyze those data.
“The next hurrah moment was after the analysis was done. I think it was maybe five or six months ago that we were starting to get this information from the authors saying, “Hey, we think we have a definitive detection.” And that was probably their hurrah moment, where they were screaming with excitement saying, “Hey, we see a signal and it’s a strong signal!”
That must have felt incredible. Were you onboard the SOFIA during this test flight?
“I was not on this flight. As the project scientist, I’m responsible for ensuring that we maximize the scientific return of the mission. So I provide oversight on all the science-related activities on the mission.”
Will SOFIA be involved in the next steps? Is it going to continue collecting data from the moon or is it moving on to different projects?
“This was just the first step. We want to know how widespread this water is and how it’s created and stored. The earliest opportunity we have to do such observations would be spring of 2021. We temporarily suspended operations because of COVID-19, but SOFIA resumed operations with new procedures in place to ensure the safety of our staff on August 17. Right now, we’re in Germany for planned maintenance.”
Have you had any other moments like this in your career?
“This is my first mission as a project scientist, and I have to say I’ve been very lucky and grateful, because last year around the same time we discovered the first molecule that ever formed in the universe. That was a big story. It’s called the helium hydride. I’m myself an astrophysicist. I love doing my research and making my findings and writing papers, but when you enable the science community to make big discoveries like this, it’s an honor.”
I love your emphasis on helping the public get excited about space. Is there anything that you wish was being talked a little bit more about?
“This is what it’s about in the end: We at NASA want to expand the knowledge of the cosmos, of the universe. We want to answer some big questions: How did the universe form? What is it made up of? How did our solar system form? How did life get on earth? And, we want to inspire people and continue to work towards answering these questions.”
Now that the results are published and the news is officially out, what have the last couple of days been like? Are you celebrating?
“Yeah, absolutely! It’s exhilarating. It’s also surreal to a certain extent. You worked so hard to a specific point, and you get there and then you see how people around the globe respond to this. And it’s amazing. You see the excitement, and that inspires people, and me. We started getting questions from teenagers now, and little kids asking about water on the moon and space exploration. That’s exactly what we want out of this. We want this to inspire our next generation.”
Like what you see? How about some more R29 goodness, right here?NASA Honors The First Teacher In SpaceHidden Figures Icon Katherine Johnson Dies At 101So, How Long Until We Can Drink Moon Water?